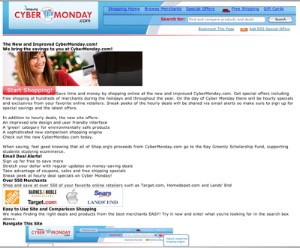 People who don’t want to fight Black Friday crowds will have a less chaotic shopping option just three days later. Cyber Monday, the Monday after Thanksgiving, is expected to be more promotional than ever this year as retailers offer one-day sales and special offers to bring holiday shoppers online.

On Cyber Monday, the ceremonial kickoff to the online holiday shopping season, online retailers will debut thousands of promotions to show what websites have to offer this holiday season. According to the eHoliday Survey, conducted for Shop.org this fall by Shopzilla, 83.7 percent of retailers will have a special promotion for Cyber Monday, up from 72.2 percent last year. The most popular promotions are expected to be specific deals (38.8%), email campaigns (32.7%), and one-day sales (24.5%). Additionally, nearly one-fourth of retailers (22.5%) will offer free shipping on all purchases. “As shoppers focus on price this holiday season, online retailers will be extremely competitive to offer the very best deals,” said Scott Silverman, Executive Director of Shop.org. “Americans who are looking to put a dent in their holiday shopping will be able to find thousands of bargains on Cyber Monday.”

Cyber Monday, a term coined by Shop.org in 2005, began after online retailers noticed a trend of people shopping online on the Monday after Thanksgiving. Since then, consumers have flooded websites on Cyber Monday and come to expect robust promotions and specials that day.

To get a handle on holiday shopping, office workers won’t be heading to the mall over their lunch hour, they’ll be staying at their desk. This year, according to a BIGresearch survey conducted for Shop.org, 55.8 percent of workers with Internet access, or 72.8 million people, will shop for holiday gifts from work. The trend of employees with Internet access shopping from the office has continued to increase: in 2005, only 44.7 percent said they shopped online from work. Though slightly more than half of workers will be shopping from the office, some are more likely to make a dent in their wish lists than others. According to the BIGresearch survey, 70.0 percent of young adults 18-34 with Internet access will shop at work. Additionally, men are more likely to shop from work than women (60.3 percent vs. 51.5 percent).

On Cyber Monday itself, hundreds of special offers will be available on the site, some of which will be exclusive promotions only available on the site. CyberMonday.com will also be featuring a Deal of the Hour this year, highlighting a different retail promotion every 60 minutes. Offers will include free shipping specials, dollars off, percentages off, and free gifts with purchase. Last year, more than 1.5 million people visited CyberMonday.com during the holiday season—three times more than in 2006. Traffic to the site was so substantial that Mall Networks has dramatically increased capacity for the site again this year.

All CyberMonday.com proceeds received by Shop.org benefit its Ray M. Greenly Scholarship Fund, which helps students pursuing careers in eCommerce. Ray Greenly was a Vice President at Shop.org before passing away from cancer in 2005.

About the Surveys: The poll on consumer shopping at work was conducted for Shop.org by BIGresearch from November 5-11, 2008. The survey, which polled 8,758 consumers, has a margin of error of plus or minus 1.0 percent. The Shop.org/Shopzilla eHoliday Study polled 60 retailers and was conducted October 1-20, 2008.

Shop.org, a division of the National Retail Federation, is the world’s leading membership community for digital retail. Founded in 1996, Shop.org’s 700 members include the 10 largest retailers in the U.S. and more than 60 percent of the Internet Retailer Top 100 E-Retailers. It’s where the best retail minds come together to gain the insight, knowledge and intelligence to make smarter, more informed decisions in the evolving world of the Internet and multichannel retailing. Shop.org programs and activities include benchmarking research, events and networking communities.