Upon my return from CES 2019 in Las Vegas last week, I reflected upon where the show has been over the last few years—and more important, where it has not been. If I could sum up the show in one word, it would have to be “smart.” Alexa, Google Home and Samsung’s new Bixby are the common gene that ran through many of the product presentations.

There is no sense getting up from your comfortable couch anymore to do anything—from turning up the lights and microwaving your dinner to looking for the newest Black Mirror entry on Netflix. Just give a shout out into your kitchen and let your smart home assistant take over.

(True story: I’ve recently renovated my new home and included a Samsung stackable washer/dryer, microwave and oven, all of which are Alexa compatible. As I was attempting to connect my dryer to my home hub, I stopped myself midstream by asking the simplest of questions: Why Am I Doing This? Has it come to the point where I can’t walk over to a dryer and turn it on or off? I chuckled and left the room with Alexa wondering where the connection was.)

However, while there may be some physical fitness ramifications to this new world order, there certainly is the mystique of how many things I can connect in my home to Alexa without “her” screaming back at me: “Enough is enough! Get off the couch and do it yourself!”

But enough about me.

I read with interest an article in the New York Times by Kevin Roose titled Apple’s Biggest Problem? Satisfied Moms. Roose talked primarily about how one of Apple’s most significant challenges in continuing to increase iPhone sales is the complacency of current users. They feel that their current iPhones are “good enough.” Why spend upward of $1,000 on a new iPhone X when their iPhone 6s does enough for 90% of consumers? 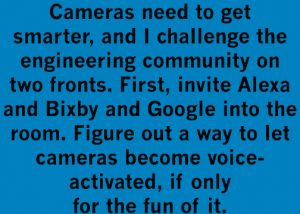 According to the article, “Back in 2015, iPhones were being replaced after roughly two years, on average, according to BayStreet Research, a firm that tracks smartphone sales. That period has jumped to roughly three years and is expected to grow even more.”

If we jump back over to the camera business, the challenge is similar. In the past, new breakthrough technology implored photographers to run to their local camera stores (or online) to replace their outdated cameras. The megapixel wars were a blessing to the industry, where newer models were obsolete just months after release.

The challenge for camera and accessory manufacturers today is to find the catalyst to move new camera buyers. Something to break through the clutter and give them a reason to open their wallets.

Which brings me to Alexa, and everything smart out there. It can be argued that CES is not really a “photography” show anymore, as most manufacturers have left the building. (With the exception of Nikon, whose booth was all about photography and was among the most populated booths in Central Hall!) Most glaring at CES was the total absence of “smart” technology in the camera world. Or any smart technology that would compel photographers to run to the camera store.

I’m no engineer (though I play one in these pages); but it seems that the incredible technology that goes into the current cameras from virtually all of the major camera manufacturers (Nikon, Sony, Canon, Olympus, Fujifilm, Panasonic and Leica) is built upon the “same old, same old” features. That’s not to say they’re not welcome. Improving image quality and focus tracking as well as video capture is vital to our category. And the incredible imaging power of smaller, mirrorless and rangefinder cameras is impressive.

Let’s go back to mom. What’s driving her to buy something new? Something to replace her smartphone that makes up for the inconvenience of grabbing an extra imaging device on which she can’t also text or search Instagram?

Cameras need to get smarter. I challenge the engineering community on two fronts. First, invite Alexa and Bixby as well as Google into the room. Figure out a way to let cameras become voice-activated, if only for the fun of it. (It’s already happening with GoPro Hero action cams and security cameras.) Let the kids get involved. Will it be groundbreaking? Probably not. But it will most certainly invite this category into the conversation that everyone else is having.

While we’re at it, we still haven’t completely solved the wireless transfer to social media challenge. Yes, it’s so much better. However, nine in 10 moms don’t know that transferring images to their phones is not as challenging as it was. And scanning a QR code to marry a phone to a camera is still not the answer. I don’t profess to have the answer, but I certainly can pose the question.

Camera manufacturers have always been resilient in finding new technologies where none existed. Image capture devices are so good right now. And like Apple’s conundrum, there may not be a good enough reason to replace what is working just fine.

It’s time to shift to a different demographic—moms, dads and also empty nesters who are looking to have some fun. Like gathering the family in front of the fireplace and yelling, “Alexa, take my picture!”