The imaging world received the equivalent of a sonic boom with the recent announcements of the Nikon Z and Canon EOS R full-frame mirrorless camera systems. This reinforced the mirrorless effect on our industry.

That the announcements came only a few weeks apart just added to the intrigue. However, the net effect is that the camera industry is now ready for the battle we’ve been anticipating.

Of course, mirrorless cameras are not new to our industry. Sony has certainly taken the world by storm with their impressive lineup of mirrorless cameras. So have Panasonic, Olympus and Fujifilm. And each brand has done quite well in establishing specific niches for their individual lineups.

But as we all know, the two lions waiting in the fields have just been poked. We can all surmise that neither Canon nor Nikon were just late to the game. Their strategies were probably to protect their DSLR businesses over the last few years while consumers learned about the advantages mirrorless cameras present. It was a wise strategy. 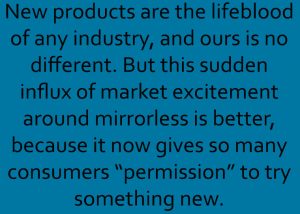 It also was certainly good for brands like Sony, who had the mirrorless market segment mostly to themselves to establish a beachhead.

Now, however, with both Nikon and Canon ready to offer significant marketing dollars and retail support to promote their respective mirrorless systems, I guess you can say the gloves are off.

From my perspective, this is a great time to be in the camera retail business, because the buzz is certainly going to result in a new wave of customers. There will be Nikon and Canon loyalists who have been patiently waiting for their brands to enter the mirrorless market with smaller, high-performance cameras.

There will be Sony loyalists who will certainly cement their wise decision to choose Sony E-mount cameras long ago. (Sony continues to develop a multitude of new lenses for their mirrorless cameras.) And of course, there are those who have been waiting to see what Canon and Nikon have been up to; this has led to pent-up demand for the mirrorless format. Now that all the cards are on the table, consumers can make an informed decision on which brand to commit to.

The Mirrorless Effect: An Influx of Market Excitement

New products are the lifeblood of any industry, and ours is no different. But this sudden influx of market excitement centered around mirrorless is better, because it now gives so many consumers “permission” to try something new. With Nikon and Canon changing their lens mounts, there also should be great news for add-on lens sales.

So, the next natural question is: should Sony be worried about their leading mirrorless market share? Obviously Sony has taken advantage of the situation over the last few years. They should be commended for steadfastly continuing to refresh their lineup as well as create new lenses.

Sony may not have the stage as much to themselves as they have recently. But their head start has positioned them as the leader in the mirrorless market. Along the way, because they haven’t let customers down, they’ve earned brand loyalty. Especially from a new, younger customer who has grown up trusting the Sony brand.

The same is true for Olympus, Panasonic and Fujifilm. Each has established customer loyalty that should remain dedicated to their brands. But they will have to work a little harder, because the playing field just became more crowded.

The winner in this is the imaging industry. New technologies by brilliant engineers have always driven this industry. Major camera manufacturers have never rested on their laurels; there have always been new technologies that have given consumers a reason to buy something new. It may have been easier during the “megapixel wars,” when compact digital cameras became obsolete practically every year.

Now, however, all of the major brands have smaller, high-performance mirrorless cameras that will invite more consumers into the category. Moreover, with lens and accessory manufacturers jumping in, we could see a great new run in the imaging industry. 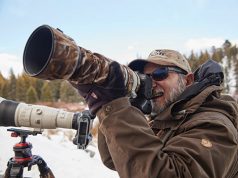 Canon at CES 2021: Redefine the Limits