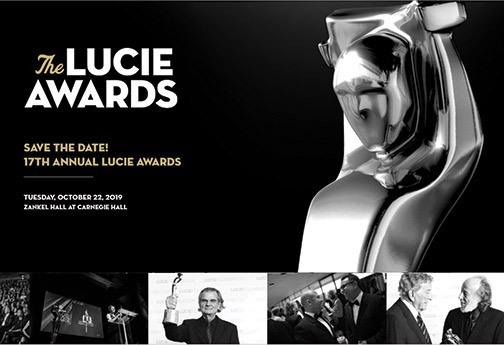 Los Angeles, CA—The 17th Lucie Awards gala returns to New York City this fall to kick off Photo Week. In addition, it will celebrate photography with a stellar lineup of honorees and the announcement of the second annual Impact Award recipient.

Moreover, the Lucie Foundation, along with its advisory board, announced its 2019 list of nine honorees:

Furthermore, the Impact Award goes to a photographer whose image or body of work created a difference in a given year. The foundation will announce the recipient of this award in September.

“Each year, the Lucie Awards strive to honor the best in our field; this year is no exception,” said Lauren Wendle, president, Lucie Foundation. “Among those we recognize, Jay Maisel is the deserving recipient of this year’s 2019 Lifetime Achievement Award. Jay, the subject of Stephen Wilkes’ documentary, Jay Myself, is an enormous talent with an extensive body of work. Both of which loom large in the industry and are beautifully portrayed in this film.”

Moreover, the documentary premiered at the DOC NYC festival and will open in theaters across the country this summer. It launches with an NYC opening on July 31 at Film Forum. The film documents Maisel’s move from his 3,500 square-foot, 100-year-old landmark building in New York, known as “the Bank,” to start a new chapter in Brooklyn. In addition, it is filmed from the perspective of his friend and fellow photographer, Stephen Wilkes.

“For the 17th year, the Lucie Awards are thrilled to honor the most exceptional talent in our global community. Rencontres d’Arles, the annual summer photography festival founded in 1970 by photographer Lucien Clergue, will be awarded the Spotlight/Visionary Award for all that it brings to the photographic community,” added Hossein Farmani, founder of the Lucie Awards.

“At a later date, we will announce the honoree deserving of this year’s Lucie Impact Award. . . . Moreover, we look forward to celebrating these extraordinary lives and careers on October 22, at Zankel Hall at Carnegie Hall, which becomes the Lucie Foundation’s New York home each October.”

Furthermore, the Lucie Awards also honor the year’s best photographic achievements of the industry by presenting seven Support Category Awards. These categories range from Book Publisher of the Year to Fashion Layout of the Year and Curator/Exhibition of the Year.

Recent winners include: Phaidon, for Generation Wealth—Lauren Greenfield; Jeff L. Rosenheim and Maria Morris Hambourg, for Irving Penn: Centennial at the Metropolitan Museum of Art, New York City; and AnOther magazine, for The Full Story: Solange Knowles, AnOther magazine, A/W17, by Peter Lindbergh.

These Support Awards acknowledge the individuals as well as institutions that play a critical role in the crafting and promoting of images. The organization will announce the nominees in September.

Tickets for the Lucie Awards go on sale this summer at lucies.org.

The Lucie Foundation’s mission is to honor master photographers; recognize current photographers; as well as discover and cultivate emerging talent. It also promotes the appreciation of photography worldwide.

Moreover, other programs include the Lucie Technical Awards (LTA); exhibitions; talks as well as workshops at the House of Lucie Galleries; Month of Photography Los Angeles (MOPLA); and the Lucie Photo Book Prize. 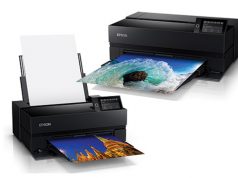 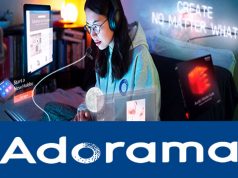