The editorial group at Digital Imaging Reporter thought it was time to recognize the incredible contributions made by those “unsung heroes” that retailers depend on every day—the retail frontline staff. They are the superstars of photo retail.

So we asked our readers to nominate their favorite retail associates for our first Superstars Behind the Counter salute. The response was so overwhelming that we plan on making this an annual feature in our magazine.

DIR‘s 2018 Superstars Behind the Counter

Eugene works tirelessly behind the counter, day in and day out, at Competitive Cameras. He is a standout in the industry as one who actually does it all—from selling to ordering, from opening to closing.

I don’t think you would find another individual who covers every base the way he does.

Robert is a monster in the photo retail industry. He has been top salesperson for 14 years at Precision Camera. He owns and shoots multiple camera brands and shows his best prints (yes, real actual photo prints!) to his potential customers. Robert started his own Facebook photo page where his customers can come and ask him questions or for suggestions, which he answers daily.

When there is a photo event out of the store on his day off, he shows up to help for free. Why? Because he knows that if he’s there and helps people at the event, they will ask for him when it’s time to buy. Robert loves photography and loves sharing his knowledge with others. From the beginner to the working pro, he is there for all.—Nominated by Jerry Sullivan, Precision Camera

We have Michael Jordan, Babe Ruth, Wayne Gretzky and Arnold Palmer rolled into one at Camera Land. Our manager is the definition of a rock star! He does whatever it takes to make customers happy. Jeff has loaned his equipment to customers if something is on back order. He runs our education department and will meet with customers on his own time if regular business hours don’t work for them. He judges contests for photo clubs because he loves photography. We started a Saturday morning photo chat and he has thanked me more than the customers have. He just loves to talk photography. He is a regular fixture at area photo club meetings and has stayed late when clubs use our classroom for their meetings.

Our favorite Jeff story involved a Girl Scout troop. The leader said she’d like to bring in about 20 girls and wanted to know what we would charge. Jeff told her to give him two minutes. He called our Canon rep and said we needed 20 point and shoots for the date. They agreed. He said he would have cameras for each girl, charged up with memory cards.

The price? Jeff told the leader, “We are happy to develop the next generation of photographers. It’s on us.” The parents could not stop thanking us and became great long-term customers. Jeff came to us after the event was arranged. We loved the idea. Like I said, he is a rock star and very deserving of this award.—Nominated by Joel and Doug Paymer, Camera Land

Robby graduated from Baldwin Wallace College in 2015 with a degree in PR and marketing. After a brief stint doing marketing for a company in Cleveland, he decided to come home and work for the family business. Robby is third generation at YM Camera. We’ve been in business since 1951 and, wow, Robby made some changes.

His social media skills are second to none. We went from 1K Facebook followers to 6K. He generally does live posts every day. Robby also posts frequently on our Instagram account. He got rid of our outdated Microsoft POS and went with a new web-based POS. This was a bridge to our new e-commerce site. E-commerce went from zero to consistently 30% of our monthly gross sales. He hired a young, hip staff similar to him with a passion for photography.

In 2017 we had our highest grossing sales ever. We are currently in the process of expanding our store. The future is bright at YM Camera.—Nominated by Jim Yankush, YM Camera

Johnnie is the consummate professional behind the counter. He is passionate about customers and their pictures. Johnnie takes pride in making sure our people get the pictures they need. He provides patient discussion, thoughtful counseling and concise coaching to lead newbies to professionals to the pictures they desire. He has an extremely loyal and dedicated following.

In addition to his work behind the counter at Paul’s Photo, Johnnie is also a published photographer in the surf, fashion, aviation and classic car + cruising communities.—Nominated by Mark Comon, Paul’s Photo

Paul’s commitment to making photography enjoyable for his customers is evident in all he does at Bergen County Camera. He not only manages the store and is the buyer, but he also teaches a Saturday morning photography class each week on a new topic, with attendance averaging 50 people.

Since the very first time we worked together as business partners, I have witnessed his commitment to ensuring all Canon brand products have their proper place and success in his store. He is focused on the entire store’s success; whether it is the Canon brand or any brand Bergen County Camera carries, he strives to represent each with passion and pride! Paul’s interests are always rooted with the customer first in mind. That is clearly evident by how many loyal customers Bergen County Camera has.

Through my professional career with Canon, I am grateful to have had the opportunity to work with Paul, both now and in the past 12 years! Paul Carretta is not just an asset to Bergen County Camera but to the entire photographic retail community!—Nominated by Brian Hist, Canon

Jacob has worked at Midwest Photo for six years and has been the Sony specialist for two years, with a master certification as a Sony expert. He has been instrumental in advocating Sony mirrorless cameras to customers, moving them into new imaging technologies. His customers always praise and thank him for his extensive knowledge. This has resulted in a loyal following as the resident imaging guru.

Jacob has been pivotal in not only being an advocate with his customers but his peers, too, resulting in a high level of conversion of the Midwest Photo staff to Sony.

In addition, Jacob has been a great asset for Sony at the many Sony Alpha Universe events and is exceptionally helpful and patient when dealing with technical questions. He is passionate about photography, especially when shooting portraits, street photography, events and his favorite automotive racing at Mid-Ohio Raceway. In addition, he is the father of three beautiful kids.—Nominated by John Bruehl, Sony

Shauna has taken St. Albert to a different level with quality of staff as well as customer service, considering she is a newly promoted store manager.

In addition to our head office retail reports, Shauna regularly runs her own internal monthly and quarterly sales reports. And she has introduced her own monthly and yearly sales goals. 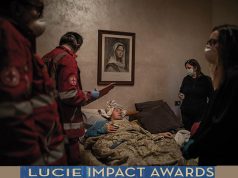