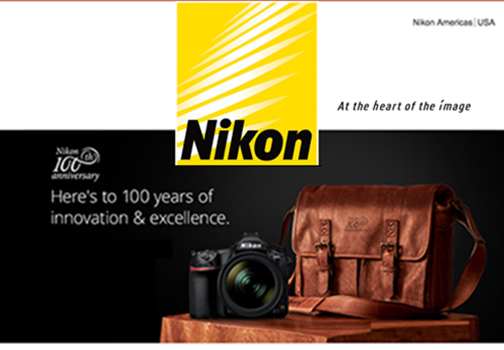 Melville, NY—Nikon Inc. formally announced the appointment of Bo Kajiwara as the new president and chief executive officer of Nikon Inc., the subsidiary of Nikon Corporation for the Americas. Kajiwara will transition from his role as the senior general manager of Sales and Marketing for Nikon Europe.

During his 29-year tenure with Nikon, Kajiwara has overseen many major product as well as marketing efforts. These include the launches of milestone DSLR cameras, multiple Nikkor lenses and compact point-and-shoot camera options.

“I am very eager to help lead the charge in the Americas. It’s an exciting time in the imaging industry. And as Nikon celebrates our 100th anniversary, the company’s outlook for innovation is positive. This is great news for our customers, partners and retailers,” said Kajiwara.

“We just announced Nikon’s most powerful DSLR ever, and the highly acclaimed D850 DSLR is just the start of great things to come. Nikon is leveraging its legacy and experience to create exceptional products and solutions for a wide range of applications.”

Prior to his position at Nikon Europe, Kajiwara held the role of general manager for the Communications Department at Nikon Corp. in Japan. As such, he was responsible for International Sales Strategy and Communications.

Moreover, Kajiwara is no stranger to the U.S., having worked at Nikon Inc. from 2004 to 2013. He rose to the role of vice president of Marketing, Planning and Customer Experience from head of the Imaging Division.

Furthermore, in his new position as president and CEO of Nikon Inc., Kajiwara will oversee markets in the Americas. These comprise the United States, Canada, Mexico and also Central Latin America. He will place a concentrated effort on marketing, product development as well as customer satisfaction.

In addition, Kajiwara will continue to promote the drive to optimize “focus and efficiency.” This strategy has become a core pillar of Nikon Corporation’s worldwide plan for restructuring to drive profitability.

Nikon is celebrating its 100th anniversary in 2017. Since the company was established in 1917, Nikon has cultivated its status as a pioneer of optical technologies globally. Guided by a corporate philosophy of “Trustworthiness and Creativity,” Nikon provides a range of products and services globally by harnessing advanced optoelectronics and precision technologies. nikonusa.com