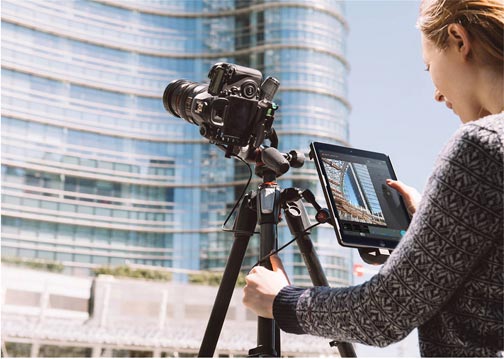 Upper Saddle River, NJ—Manfrotto, manufacturer of premium photo, video and lighting support products and accessories, launched its Digital Director app v.2.1 and new hardware configurations to accommodate the just-announced iPad Pro and iPad mini 4. The announcement was made at the NAB Show, which is held April 18–21, 2016 in the Las Vegas Convention Center.

Live demonstrations of Digital Director are being held every half-hour through Wednesday from 11 a.m. to 5 p.m. in the LVCC Central Hall, booth C6025. The demos are presented by Manfrotto Ambassadors Bill Frakes and Drew Geraci.

Originally launched in 2015, Digital Director is an Apple-certified electronic device that works as an interface between Canon or Nikon DSLRs and an iPad Air, iPad Air 2, iPad mini 2 and iPad mini 3, and now also iPad mini 4 and iPad Pro. Furthermore, the CPU embedded within Digital Director and the free dedicated Digital Director app work as one to connect the two devices. This allows users to manage their photo as well as video workflow—from controlling camera settings and editing images to managing and sharing files—all from their iPad screen via a tethered cable connection. The tethered cable also enables the camera to be placed in awkward, difficult-to-reach positions and to be remotely controlled by the user.

1. Set up of the camera and shooting: quick intervalometer as well as time-lapse setup; bracketing; depth-of-field preview in photo mode for Canon DSLRs; new focus options like step focus for more precise focus control; and continuous “auto-play” mode where pictures can be displayed in full screen while they’re being taken with the camera.

2. Management of albums as well as pictures: keywords can be assigned to albums and pictures; pictures can be moved within different albums; users can also edit with history options; and improved gallery access speed.