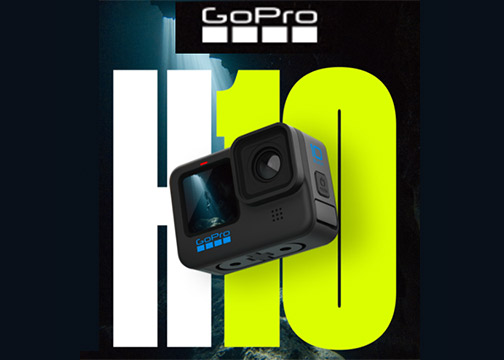 What’s more, the new processor also enables HyperSmooth 4.0 video stabilization for smooth shake-free video. In addition, the camera is cloud connected; when users plug it in to charge, it automatically uploads recently captured footage to a GoPro cloud account. This feature, along with unlimited cloud backup of GoPro footage at original quality, is available to GoPro subscribers for $4.99 a month or $49.99 a year.

“The Hero10 Black is one of the most impressive cameras in the world, regardless of price,” said Nicholas Woodman, GoPro founder and CEO. “Congratulations to our product and engineering teams on creating such a worthy 10th edition of our beloved Hero camera.”

Another notable upgrade is the camera’s front color display with higher frame rates for smoother live preview. The rear touch display with touch zoom is also faster and more responsive.

Other key features include TimeWarp 3.0 with Real Speed and Half Speed functions; 1080p livestreaming with HyperSmooth 4.0. video stabilization; and a 1080p webcam mode.

The GoPro Hero10 Black comes in a package that isn’t even packaging per se; rather, it’s a travel case that fits additional GoPro mounts and accessories. “We’re as committed to reducing GoPro’s impact on the environment as we are to producing the world’s most versatile cameras and imaging software solutions,” said Woodman.

The GoPro Hero10 Black is available for $399.98 with an included one-year GoPro subscription or $499.99 MSRP without a subscription. Furthermore, existing GoPro subscribers can purchase a Hero10 Black + Accessory Bundle at subscriber-exclusive $399.99 pricing on GoPro.com. The accessory bundle includes an extension grip with tripod, a magnetic clip mount, a spare battery plus a 32GB SD card.