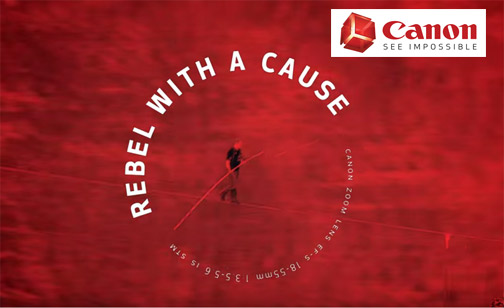 Melville, NY—Celebrating 25 years since the introduction of Canon’s first EOS Rebel SLR camera, Canon USA honored the milestone by introducing its Rebel with a Cause campaign. In 1990, the Image Is Everything campaign introduced the Canon EOS Rebel, “an SLR camera born with a cause”—to put the power of pro photography into the hands of the public and level the playing field.

Now, 25 years later, Canon’s Rebel with a Cause embarks on a journey to follow modern-day rebels who challenge convention in their own unique way, capturing their causes through the eye of an EOS Rebel DSLR. The campaign kicked off featuring American daredevil Nik Wallenda and will be followed by Grammy Award-winning record producer Swizz Beatz.

“Canon has always made it a priority to make what was once thought to be impossible possible, and it’s one of the reasons we created the EOS Rebel cameras,” said Yuichi Ishizuka, president and COO, Canon USA, Inc. “The heart of this campaign is about showcasing modern day rebels entirely through the eyes of a Canon EOS Rebel camera, encouraging people to take their creativity to the next level and to tell their own unique stories.”

In the campaign’s first video, Nik Wallenda, a member of the Flying Wallenda family and the only person to walk a tightrope across Niagara Falls and the Grand Canyon, encourages senior citizens to check items off of their bucket lists. After visiting a senior center in Sarasota, Florida, the man who’s conquered every feat he’s ever dreamed of sent one senior citizen into the sky and one to the racetrack to inspire them to finally achieve theirs. The campaign, shot entirely with Canon Rebel T6i DSLRs, can be viewed at http://canon.us/bkQln.

“I’m honored to be selected as a Rebel with a Cause as part of Canon’s campaign, as I’ve spent my entire life pushing boundaries and encouraging others to do the same,” said Wallenda. “Partnering with Canon to tell my story and continuing to pursue my mission to never give up, has been an incredibly rewarding experience, and I hope this inspires others to live their lives to the fullest.”

The initiative will continue with hip-hop artist and multi-platinum record producer Swizz Beatz—and into 2016 with a range of high-profile individuals who each embrace their own cause.

The Evolution of the Canon EOS Rebel Camera

Canon announced the first EOS Rebel SLR camera 25 years ago in August 1990. At the time, it was Canon’s smallest and lightest 35mm autofocus single-lens reflex (SLR) camera in the EOS line of autofocus SLRs. The EOS Rebel line has been continuously known to pack advanced features and imaging technologies into affordable consumer-level camera bodies.

Through its first 14 years, Canon introduced 13 EOS Rebel film SLR models and in 2003, the Canon EOS Rebel digital SLR was born, marking the beginning of the modern EOS Rebel DSLR. From 2003 to 2015, there have been 15 models in the EOS Rebel DSLR line, including the latest models introduced this year that feature built-in Wi-Fi and NFC capability—the EOS Rebel T6i and T6s.

The EOS Rebel line has been used by creative consumers to express themselves through still images for decades, as well as Full HD video since the EOS Rebel T1i launched in 2009. Also known for their compact size and feature set, these cameras have enticed consumers to make this their first entry into Canon’s EOS interchangeable-lens camera family. All Rebel cameras are compatible with Canon’s entire line of EF and EF-S lenses. usa.canon.com