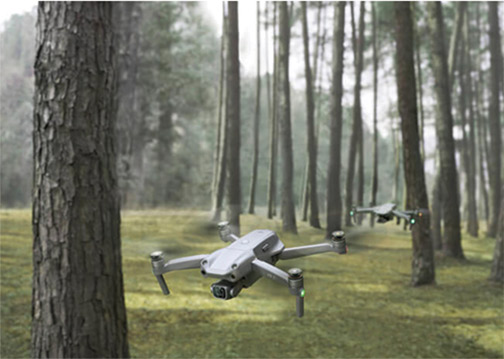 “Every creator remembers what it felt like to fly a drone for the first time; they’ll feel the same sense of wonder and possibility when they first experience DJI Air 2S’s unparalleled mix of astonishing flight capability and gripping image quality,” said Ferdinand Wolf, creative director, DJI Europe.

Notably, the DJI Air 2S is the first drone of its size to capture 20-megapixel still images or 5.4K video. That’s due to a new one-inch sensor that was previously available only on larger, less agile drones.

In addition, the drone provides the new MasterShots feature. This advanced feature uses automatic flight path planning to set its course while recording video. Upon completion of the flight, the drone automatically merges the footage under one theme to create a video.

Moreover, DJI Air 2S’s 31 minutes of maximum flight time and four-way directional obstacle sensors let the pilot focus on the shot. Also, the drone’s safety systems warn when obstacles are getting close. In fact, APAS 4.0 is the most advanced autopilot system on any DJI drone. When turned on, it seamlessly maneuvers around objects autonomously.

Further, O3, DJI’s third iteration of OcuSync, brings the company’s most reliable transmission technology to this drone. The upgraded FocusTrack mode also includes a suite of programmed modes like Spotlight 2.0, ActiveTrack 4.0 and Point of Interest 3.0 that mimic the focus, control and movement of a pro video operator.

To expand creative vision and capture high-grade footage, the drone boasts a one-inch sensor. It is capable of recording 20MP images as well as 5.4K video at 30 frames per sec or 4K at 60 fps and 150Mbps. The one-inch sensor is larger than the sensor on the original Mavic Air 2. In addition, it has a larger pixel size of 2.4μm, capturing more information and detail for better photos and videos.

The drone also adds 8GB of internal storage. Pilots can choose to record in H264 or H265, depending on their preferences for image detail and storage capacity. They can also choose from three video color profiles: normal (8 bit), D-Log (10 bit) or HLG (10 bit).

The DJI Air 2S has the most programmed flight modes and image capture modes of any DJI drone of its size. These creative options include:

• MasterShots: The drone will autonomously plan a flight path; choose from three different image capture modes (proximity, portrait or landscape); and also start recording classic aerial footage. Pilots can choose different themes and the DJI Fly app will generate a video that’s ready to share.
• FocusTrack: Pilots select a subject by drawing a square around it on their mobile devices. They can then choose from Point of Interest 3.0, an autonomous flight path around the subject; ActiveTrack 4.0, which tracks the subject and keeps it in the frame; or Spotlight 2.0, where drone movement is controlled by the pilot while it locks the subject into the frame.
• QuickShot: A staple DJI feature, QuickShot modes include rocket, circle, dronie, helix, boomerang and asteroid effects.
• Hyperlapse: This mode allows pilots to see the world sped up from the air and in motion, with resolution up to 4K. Content captured in 4K resolution and lower can utilize digital stabilization for an added layer of smoothness.

The drone also uses four high-grade antennas and the latest version of DJI’s OcuSync transmission tech—O3. As a result, it delivers a stable feed at a maximum distance of 7.5 miles. And four-way sensors help reduce the risk of collision. Moreover, the newly upgraded front, rear, bottom and top obstacle sensors incorporate binocular zooming technology. It recognizes incoming objects from farther away at faster speeds.

In addition, the drone uses the latest version of Advanced Pilot Assistance System (APAS) 4.0. This enables it to autonomously maneuver around, under and over obstacles. While flying at normal speeds, the improved APAS 4.0 offers a wider field of view to detect obstacles.

Subsequently, when pilots are flying at higher speeds, as the angle of the drone pitches forward more, the new upward obstacle sensor plays a critical part in assisting obstacle detection. Furthermore, the AirSense system warns drone pilots of nearby airplanes/helicopters transmitting ADS-B signals.

Other standard safety features include an improved return-to-home feature; it can bring the drone back to its launch point if it loses contact with the controller or reaches a critically low battery level. Also, GEO 2.0 geofencing advises pilots of sensitive locations and helps them automatically keep away from high-risk areas such as airports.

The DJI Air 2S uses the latest version of the DJI Fly app. The app provides educational information and tutorials to get new pilots up in the air quickly.