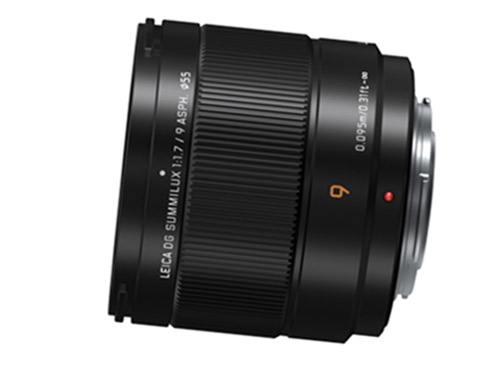 Model H-X09 provides an 18mm-equivalent focal length as well as a short focusing distance of 3.7 inches with a 0.25x magnification ratio (35mm camera equivalent: 0.5x). Moreover, the combination makes it possible to distinguish the subject’s presence against the background. The lens also boasts high descriptive performance and smooth bokeh.

In addition, astigmatism is corrected with the aspherical lenses, to help achieve high resolving performance. The UHR lens also provides uniform quality from the center to edges of the image while also downsizing the lens unit.

Further, with its nonlinear setting, focus is shifted with a variable amount according to the rotation speed of the focus ring, while focus is shifted with a designated amount according to the rotational quantum of the focus ring for the linear setting. Sensitivity (the amount of focus shift per rotational quantum) is also selectable from 90º to 360º by 30º to enable intended focus operation.

The lens is also a solution for video recording. It integrates a mechanism that suppresses focus breathing, a problem of all interchangeable lenses intended solely for still image photography. It also has a micro-step aperture control for smooth exposure change.

With its compact size and light weight (4.5 ounces), the lens offers the mobility of the Micro Four Thirds system. In addition, it is dust and splash resistant for use in harsh conditions, including temperatures at 14ºF. It also features a 55mm filter diameter and a 7-blade circular aperture diaphragm.

Panasonic’s Leica DG Summilux 9mm f/1.7 lens will reach retail in late July. It will have a suggested retail price of $499.99 in late July.