Melville, NY—Market data from the NPD Group confirmed the Nikon Z 9 was the top–selling professional flagship, full-frame mirrorless camera in the first quarter of 2022.

The NPD Group/Retail Tracking Service, U.S., is based on units, January through March 2022 combined. Moreover, Nikon defines “professional flagship cameras” as those that have an average sales price of $5,000+.

The data is based on a comparison of U.S. unit sales of full-frame mirrorless cameras with an average selling price of $5,000 and above in the first three months of the year. Further, the Nikon Z 9 attainted a 57% unit share in this segment.

“This flagship category is vital; this is where the top-of-the-line technology, performance and reliability matter most, for the most demanding customers,” said Jay Vannatter, executive vice president, Nikon Inc. 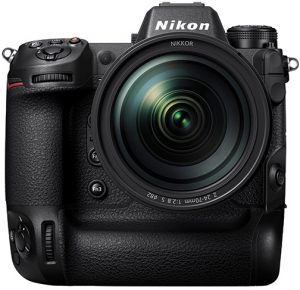 “We are constantly receiving shipments of the Z 9 from the factory, which are immediately out the door to customers. We are working as hard as we can to fulfill the demand; it’s truly invigorating to hear the overwhelmingly enthusiastic and positive response from more and more customers everyday who are receiving their cameras.”

In addition, DPReview.com awarded the Z 9 with Camera of the Year, the Reader’s Choice Award. It also garnered the highest score ever for a digital camera, 94%. The Nikon Z 9 also received the Camera of the Year and Readers Award simultaneously in the Camera Grand Prix (GP) 2022.

In addition, the camera provides sustained fast continuous shooting bursts; in-camera 8K video recordings for more than two hours; blackout-free real-live visibility in the viewfinder; as well as a sensor scan rate so fast it eliminates the need for a traditional mechanical shutter.