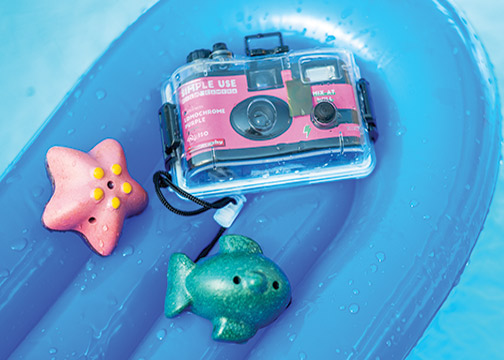 New York, NY—The Lomographic Society released the Lomo Analogue Aqua, a Simple Use series reloadable camera with an underwater case. Available at select retailers as well as lomography.com, the latest addition to the company’s reusable Simple Use family operates at depths of 33 feet.

The lightweight, pocket–size, reloadable film camera is an able travel companion. The special edition Simple Use film camera and its underwater case operate whatever the weather, at the beach or poolside. Built to last, the image maker can be dress up for an underwater exploration or down for on-land photography.

In addition, the preloaded, compact point-and-shoot camera is perfect for beginners. Moreover, all original functionality is fully seafaring. Users can take creative control and color their underwater creations with the three color gel flash filters. Further, they can take snaps with the camera’s built-in flash to brighten shadowy seas.

Once photographers have snapped their way through the first roll of film, it’s time to get the  negatives developed. They can then refill the underwater case with a brand–new Simple Use reloadable film camera preloaded with black & white, color negative, LomoChrome Purple or LomoChrome Metropolis film. Or they can reload the camera itself with a new Lomography film.

Moreover, the Lomographic Society published a guide with top tips on how to reload the Simple Use reloadable film camera.

The P&S camera features a lens focal length of 31mm; a shutter speed of 1/120s; and an f/9 aperture. In addition, the lens focuses from 1m to infinity. What’s more, the camera’s built-in flash has a 15-second recharge time. One AA battery powers the camera.

Preloaded with either 400 color negative or LomoChrome Purple film, the point-and-shoot camera retails for $39.99.