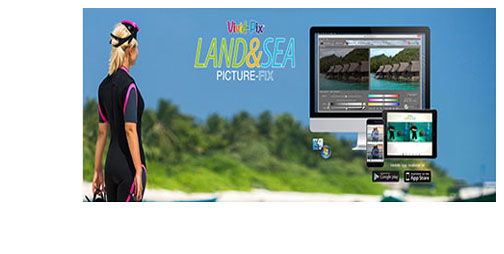 Alpharetta, GA—Vivid-Pix, a software company with a focus on photography, announced that its easy-to-use Land & Sea software is now available on iTunes.

This move enables photographers to improve their photos on smartphones or tablets, regardless of the device used to take them. Land & Sea is now available for use on computers, mobile phones and pads/tablets.

The software is designed to allow consumers to enhance photos taken in a pool or while snorkeling with one click. “Its go-anywhere mobile convenience makes it the perfect companion for vacation and travel pictures, both topside and underwater,” said Rick Voight, Vivid-Pix’s CEO.

“In the world of unlimited apps, it’s hard to imagine something so needed for improving photos would just be coming. However Land & Sea is here now,” added Voight, “and it is a great way for consumers to vividly, and in great detail, relive and share their summertime memories of camping, visiting local and distant parks and forests, or cooling off at a nearby pool or beach.”

The software is intended to appeal to both serious and novice photographers, as well as travelers and vacationers.  And this is regardless of whether their camera is a high-end DSLR, a cell phone, or a wearable camera.

“Even today’s best digital cameras or smartphone cameras can create unwanted photographic issues. Like an image looking too dark or too light, colors that look wrong or an annoying tilted horizon,” said Voight.

“These common problems can all be corrected quickly and easily with Land & Sea’s powerful and accessible tools without needing to buy and learn expensive and complex image editing software used by professional photographers.”

Once users are satisfied with their processed image, Land & Sea lets them save it as a full-resolution file or as a low-resolution HD file for e-mailing and sharing on social media. They can also save the image in both file sizes, to eliminate unnecessarily large file transfers.

A free trial version of the software for either Mac or Windows platforms is available for download.