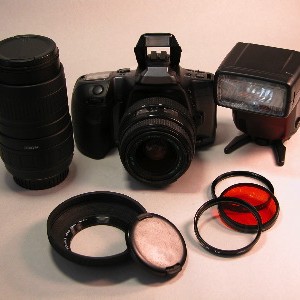 Expect what is an already red hot DSLR market to gain even more steam in the coming weeks with Photokina 2006 (September 26 – October 1) fast approaching. While this has already been a robust year in this category with several new entrees making headlines, Digital Clique has it on good authority that the bi-annual German imaging extravaganza will add a bit of fuel to the DSLR fires that have burned hot all year. Canon, Nikon, and Pentax might make the loudest noises but expect interesting news from the rest of the field as well, including Olympus, Panasonic, Sony, Samsung and Fuji.

Lots at stake in this game as a market once dominated by Canon and Nikon now has plenty of company with several of the major CE players now infringing on what was once hallowed and very traditional photographic grounds. You don’t need us to tell you how much more profitable the DSLR market is than the point-and-shoot digicam market. The after-sale accessory game with DSLRs is even more lucrative than that market was in the 35mm world.

The dynamics of this market are changing as well as NPD recently released information that the DSLR crowd of today is decidedly more female than it was a decade ago as well as about 10-12 years younger than the mid-40s crowd of years gone by.

With entry-level models now coming in at close to $500, the lens manufacturers are also breaking into wide smiles and you can expect that market to heat up as well as we move into 2007. Look for a complete breakdown of the exciting DSLR market in the September issue of Picture Business.