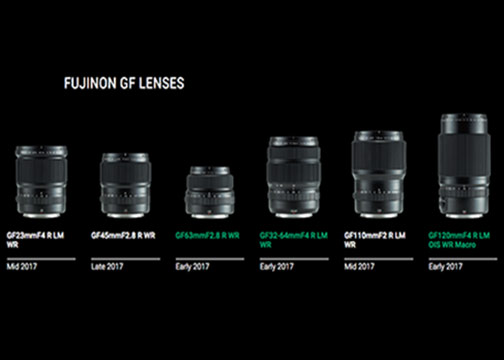 Leveraging the mirrorless structure, the lenses’ mount has a 26.7mm short flange back distance that reduces the back focus distance. As a result, they prevent vignetting and achieve edge-to-edge sharpness. In addition, GF lenses support up to 100 megapixel sensors. Their barrels have an aperture ring and a C (command) position to change the aperture with the camera’s command dial. The A (auto) and C positions have a locking button on the ring.

All Fujinon GF lenses are dust and weather resistant. They are also built to withstand operation at temperatures as low as 14ºF. In addition, fluorine coating applied to their front lens elements creates a hydrophobic coating that repels moisture.

With 8 groups and 10 elements, including 1 ED (extra-low dispersion) element, its lens construction is the most suitable for high-resolution.

The small, lightweight lens has a diameter of 84x71mm with a weight of 14.2 ounces. Aberrations due to focus distance are said to be suppressed, as the lens uses the front group for focus. It will retail for $1,499.95.

This lens is constructed of 11 groups and 14 elements, including three aspheric elements, one ED lens and one super ED lens. Fujifilm says this allows the lens to achieve image quality rivaling prime lenses. In addition, it uses internal focusing, thereby reducing the weight of the lens. It also achieves fast, silent AF by using a linear motor to drive focus. SRP: $2,299.95.

This weatherproof lens is constructed of 9 groups and 14 elements, including three ED elements. By adopting a floating focus method using a linear motor, silent high-speed autofocusing is achieved. Furthermore, due to the arrangement of the ED lenses, chromatic aberrations are also corrected, contributing to high-quality images.

When designing this lens, Fujinon engineers considered the quality of the out-of-focus area, both in front and behind the plane of focus. As a result, the lens produces artistic bokeh. It is also equipped with optical image stabilization (OIS) effective up to five stops. This makes the lens suitable for handheld shooting or shooting in low light. SRP: $2,699.95.